Video cables can be confusing. What do the letters stand for? Which is better? How come this cable doesn’t work with this plug? Ken’s Corner to the rescue.

Video cables connect your computer to a monitor, allowing you to actually see what you’re doing. It might seem like there are dozens of video cables, but in reality there are only four types, each with their different versions and each with their own features. 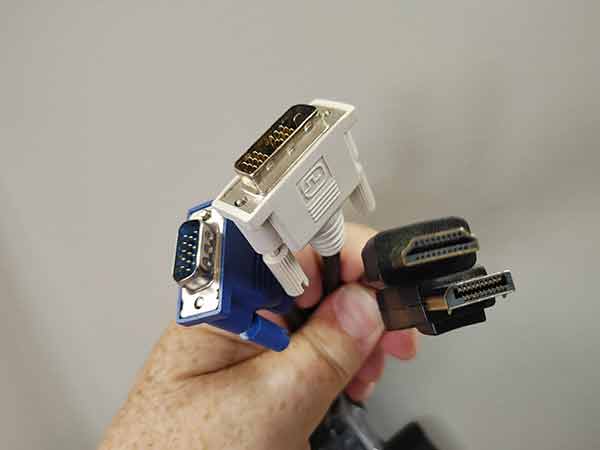 The oldest is the VGA – Video Graphics Array – which got its start way back in 1987. It still turns up on a lot of desktop computers and monitors, and until somewhat recently, was common on laptops for connecting to a larger screen. While it’s been the standard for years, it’s falling out of favor and probably won’t be around a lot longer. VGA signals are analog and can only carry audio information. For basic usage, a VGA cable will do the job, but more complex tasks are better served with a different cable.

1999 saw the release of the first digital cable: the DVI, or Digital Visual Interface. While fully compatible with VGA technology, the DVI was, as its name indicates, predominately digital. Digital signals carry a lot of advantages over analog. They carry more information than analog, and they are much better at maintaining the quality of the signal. DVI cables come in three types: DVI-D which are exclusively digital, DVI-A which are exclusively analog, and DVI-I which can carry either signal.

The HDMI came about in 2002 when seven companies pooled their research to create a video connection completely different from the VGA technology. High-Definition Multimedia Interface is backward compatible with DVI-I and V, but not with analog versions. HDMI was the first signal to carry both video and audio information; HDMI supports up to 32-channel audio. HDMI is the most common video plug currently, and is the connection of choice for connecting computers to smart TV.

DisplayPorts are very similar in shape and basic function, and as the newest video connection it was released by Dell in 2006. The DisplayPort came as a way to cut costs, since HDMI is a proprietary system. In order to use HDMI technology in a monitor or computer, a licensing fee has to be paid to the patent holders. DisplayPort is the best choice for computer/monitor pairings due to higher speeds and resolution capabilities.

Is there something you’d like to see covered? Send your questions to .